In the ’50s both the American and Soviet political leadership ordered seaplanes, able to carry out nuclear bombings. In the case of destroyed airfields, these monster seaplanes still could have been able to react with nuclear bombs to the aggressor. 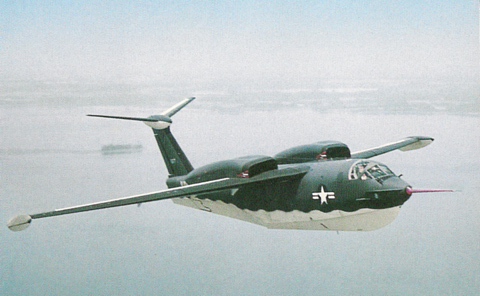 At the beginning of the ’50s both superpowers were developing strategic nuclear bombers. Alongside the terrestrial bombers, there would have been seaplanes for the presumed case of only sea, water or snow remaining.

Around 1950 the U.S. Naval Airforce was calling for a tender of developing a Seaplane Nuclear Strike Force. There were three requirements: the payload must be around 13 tons, the range from the aquatic base being 2400 kilometers, and the speed of 0.9 Mach, also on low altitude. The factory of Glenn Martin emerged as the winner, who suggested a jet-powered strategical bomber seaplane with the name of SeaMaster.

The Martin P6M SeaMaster is a forty meters long bomber seaplane with swept wings, which lowered just as much to allow the stabilizer floater to be installed at the tip of the wing. Two turbojet engines were employed on both sides on the overwing pods. A rotable bomb-bay was engineered at the middle of the fuselage, meanwhile the bombs also could have been refilled from above, on water. On the latter model, the aircraft was able to fly for a range of 3000 kilometers with a speed of 1000 kilometers per hour. 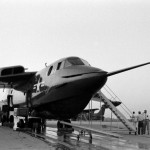 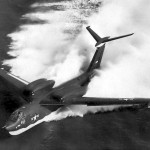 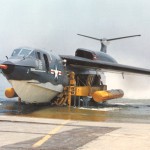 At the aquatic base the aircraft was taxied into and out of the water on a special ramp, floating onto a wheeled chassis, which was dismantled in the water. An enormous engine-powered sea-sleigh was designed for supplying on water, either onto which the SeaMaster was pulled out, or standing beside it they could refuel the plane. A supporting submarine was also ordered next to the seaplane, as the oceans and lakes worldwide were the unfailing source of its runway for the deployments.

The U.S. airforce has received the final model of the Martin SeaMaster, but the production of the bomber seaplane was not carried out, because of the change og the concept, as rockets have taken over the task.

Meanwhile in the 1950s the Soviets did not invite anybody to a tender, but first sectretary Krushchev charged the engineers with the task of constructing a nuclear bomber seaplane, with a take-off weight of 250 tons. We review two plans.

The first was prepared by Roberto Bartini aeronautical engineer, an Italian communist emigrant, who was a victim of Stalinist purge, but in the prison he still created plans for Soviet bombers onto the battlefront. He was rehabilitated in the fifties, and moved to Siberia which might have been an inspiration to him, as he created an amphibious seaplane, also able to operate on snow and ice with ski-boards. 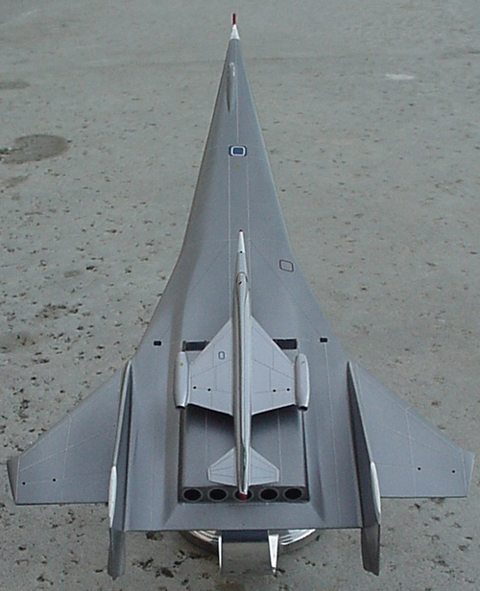 The nuclear bomber A-57 of Bartini measured seventy meters in length. The special, forty meter span delta-wing, developed by him stabilized the plane well on water. For the two Mach speed, the thrust was supplied by five jet-engines, found inside the compartment between the two vertical stabilizers. Operated by three pilots, the plane coudl fly at an altitude of 14-23 kilometers, with a possible range of an astonishing 14000 kilometers. Despite this huge range, Bartini planned a naval refueling by submarines, instead of an aerial refueling. Thanks to the ski-boards, the arctic operation could also be considered.

The other plan was of the Myasishchev-office. They were already working on a strategical nuclear bomber, operated from an airbase, when the order was given by Krushchev. The fascinating element of the M-70 seaplane was the retractable waterski-board. This was a neccessary construction, as the plane could only perform an intercontinental flight with two landings, where a submarine waited to refuel it. Compared to the 240 tons take-off weight, the four engines – which could lift the airplane to an altitude of 20 kilometers, flying with a speed of 1800 km per hour – were fed with 140 tons of fuel. 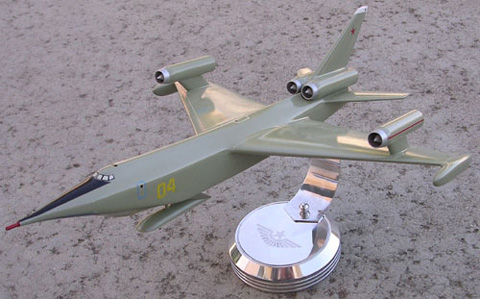 The M-70, similarly to the A-57 of Bartini remained a plan only, manily due to the small range and the change of war, although Myasishchev was the first, who could engineer a supersonic strategic bomber, able to reach America, the M-4 – the pair of the still flying “Bear” Tu-95 – with a number of 120 aircrafts. Similarly to the Americans, the Soviet spaceship, the Sputnik and the intercontinental ballistic rockets, combined with the submarined launched rockets, threw away the idea of the seaplanes.

But the seaplanes have proved that the nuclear war can not be won.