Update. After two weeks the water taxi test Burt Rutan’s SkiGull was its maiden flight from Coeur d’Alene airport today. In new hangar at this airport Rutan’s team is developing the aircraft that will operate at water, snow and unimproved land also.

The SkiGull flight lasted nearly one and a half hours. Test pilot Glenn Smith reported that the plane was responsive, predictable and fun. The test pilot showed the skis of SkiGull in the air. If more to come, we will update this article.

A few words about water taxi test, more the link at the end of this article.

The water taxi test reached the 18 knots speed and crossing the chase boat – in which Burt and his wife, Tonya and his team sat – wake. However, the low nose attitude produced vision-obscuring spray over the windshield. Further data was gathered to support the design of the needed hydrodynamic modifications to correct the nose-low attitude.

The SkiGull design is most of the water takeoff run is done with the aircraft supported above the water on flexible water skis. The flexible skis are intended to provide shock absorption to allow it to operate on rougher water than conventional seaplanes. 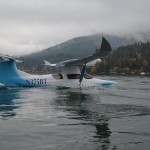 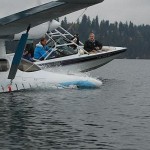 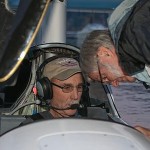 This summer Burt Rutan showed only pictures about his “retired” seaplane in Oshkosh. So we are very pleased that today the 47th aircraft model of the world-famous designer, the SkiGull flew first.